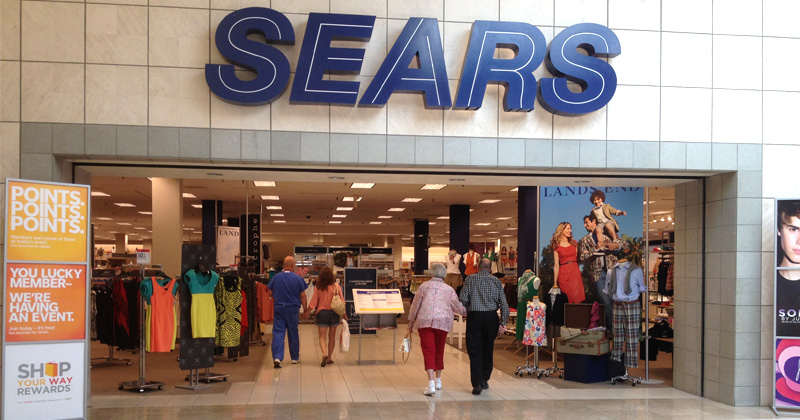 “We tried to hang in

as long as we could”

Suppliers to Sears Holdings told Reuters they are doubling down on defensive measures, such as reducing shipments and asking for better payment terms, to protect against the risk of nonpayment as the company warned about its finances.

The company’s disclosure turned the focus to its vendors as tension is expected to mount ahead of the key fourth-quarter selling season amid rising concern about a potential bankruptcy, they said.

The storied American retailer, whose roots date back to 1886, said on Tuesday that “substantial doubt exists related to the company’s ability to continue as a going concern.”

Shares of the company closed down 12.3 percent at $7.98 on the Nasdaq. Earlier, the stock recorded its biggest one-day percentage decline since November of 2012.

The managing director of a Bangladesh-based textile firm said his company is using only a handful of its production lines to manufacture products for Sears’ 2017 holiday sales. Last year, nearly half of the company’s lines in its four factories were producing for Sears.

“We have to protect ourselves from the risk of nonpayment,” said the managing director, who declined to be identified for fear of disrupting his company’s relationship with Sears.

Mark Cohen, the former chief executive of Sears Canada and director of retail studies at Columbia Business School in New York City, said vendors will keep a close eye on Sears’ finances. “Whatever vendors continue to support them are now going to put them on even more of a short string. That means they’ll ship them smaller quantities and demand payment either in advance or immediately upon delivery.”

He added: “Sears stores are pathetically badly inventoried today and they will become worse.”

Jason Hollar, Sears’ chief financial officer, said in a Wednesday blog post that Sears’ move to raise capital in recent months is helping strengthen the company’s balance sheet. Sears is “a viable business that can meet its financial and other obligations for the foreseeable future,” Hollar said.

He cited a $1 billion increase in liquidity from a new secured loan facility and a new asset-based loan that provided $250 million more in “financial flexibility.”

Retailers in distress often use their accounts receivable to finance operations, and Sears had $466 million in receivables, down from $635 million in 2012.

Another supplier to Sears, Arnold Kamler, CEO of New Jersey-based bicycle manufacturer and importer Kent International Inc, said he was not surprised by Sears’ Tuesday announcement. He said he noticed a warning sign last year when Sears pushed to increase its purchases, which occurred “because a lot of their current suppliers were either cutting them off or limited them on credit.”

Kamler said he declined to sell Sears more product and that he receives a report once a week from his accounting department because of concerns around billing, payments and deductions.

“So far there was only speculation that they would declare bankruptcy in 2017. But now they are acknowledging it, which definitely complicates our relationship with them and our decision to accept future orders from Sears,” the executive said.

A second clothing supplier from Bangladesh who did not wish to be named said he renegotiated payment terms with Sears a year ago and was being paid within 15 days of sending a shipment, compared with the traditional 60 days. He is considering asking the company for an advance payment on orders going forward.

Neil Saunders, managing director at retail research firm GlobalData, said tension will grow as the year goes on. “As we move towards the last quarter, I think we’ll find there are more and more suppliers that are not necessarily willing to engage with Sears” and will demand cash up-front.

Another sign of Sears’ weakness is that insurance companies that once provided policies to Sears vendors – insuring against nonpayment for their goods – are no longer doing so.

Doug Collins, regional director for risk services at Atradius Trade Credit Insurance, said his firm has stopped providing insurance to Sears vendors. “We tried to hang in as long as we could,” he said. “Vendors may try to get a few more cycles in before the worst happens, and then it just depends if they’re lucky or not.”